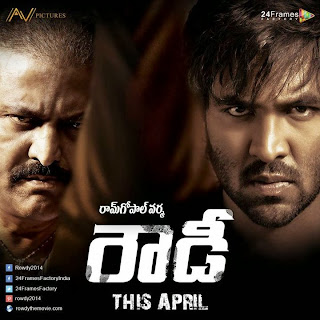 The most Awaited Film of Ram Gopal Varmas Rowdy is set to hit the screens on april,2014.

Actor Mohan Babu will be seen in his natural avatar in RGVs forthcoming big action film ‘Rowdy’ sporting his real look without toupee and with rugged good looks.

This film also marks the return of Dr. Mohan Babu and Jayasudha to the big screen after more than a decade.

The music for the film scored by Sai Karthik is tuned to be a sure fire rocker.
Labels: Jayasudha, Manchu Mohan Babu, Manchu Vishnu, Ran Gopal Varma, Sai Karthik ., Shanvi
Email ThisBlogThis!Share to TwitterShare to Facebook