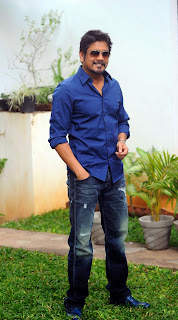 Nagarjuna is entering into the Television as an anchor. He  is going to announce it Officially about his forthcoming Telugu Version of Kaun Banega Crorepati directed and produced by Sidartha Bashu  on April 18th.
The show will be named as"Koteeswarudu Evaru" , the show promos has been already released and Nag is going to announce it on April 18th along with Nimmagadda Prasad and Allu Aravind who are also partners in Maa TV, it is known fact that Nag is also chairman for the Maa TV. KBC show has become super hit in Sony TV which was hosted by Bollywood legendary actor Amitabh Bachchan and Sharu khan ,Cinedunia .com Wishes Akkineni Nagarjuna all the best .
Labels: 2014, Gossips, Ngarjuna
Email ThisBlogThis!Share to TwitterShare to Facebook