Rakul Preet Singh to pair up with Ram Charan for Sreenu Vaitla's Film . 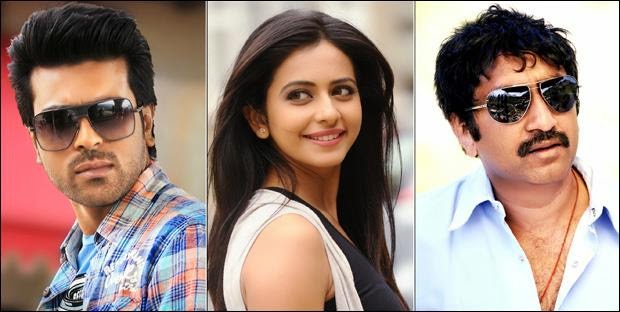 Ram Charan- Sreenu Vaitla's film has been in the pre-production phase for quite a long time now. Finally, an official word from the team has come out and the film is said to have its formal launch on March 5. The film is rumored to be titled as My Name Is Raju. Rakul Preet Singh has been roped in to romance Ram Charan, and she has expressed her joy over bagging her first big film alongside Mega Power Star. D V V Danayya will be producing the film on D V V Entertainments Banner for the first time.

Manoj Paramahamsa, who is known for his spectacular camera work, is going to be the director of photography and Anirudh Ravichander of Kolveri Di fame is scoring the music. According to the team, the film will have its regular shooting from March 16. As said and done, Kona Venkat and Gopi Mohan have given the story for the film and Kona Venkat is also penning the dialogues for the film. Sreenu Vaitla, along with yielding the megaphone, is also writing the screenplay for this yet to be titled project. Ram Charan has never really tried to show his comedy side to the audience in his films and this film is coming out with a promise to show Charan in an out and out comedy role. The film is slated to release on October 15, a week ahead of Dusshera.
Labels: 2015, Anirudh Ravichandaer, DVV Danayya, Gopi Mohan., Gossips, jr Ntr, Kona Venkat, Monoj Paramahamasa, My name is Raju, Ntr, Rakul Preet Singh, Ramcharan, srinu Vaitla
Email ThisBlogThis!Share to TwitterShare to Facebook